At this year’s Eurodoc conference from 26-29 April 2017 in Oslo, Norway, Burim Ramaj and Cécile Blaser, both University of Fribourg, represented actionuni. Eurodoc is the European Association of doctoral candidates and young researchers. actionuni (Switzerland) is member in Eurodoc since 2006. In total, 32 organisations are member of Eurodoc, representing their respective European countries and the Council of Europe.

This year’s topic was of the Annual Conference of Eurodoc was “Open Science”, a heavily discussed topic also in Switzerland.

The first day saw a keynote and discussions about why it is important to have Open Access Publications. The second day of the conference was dedicated to learn about possibilities of how the goal of complete Open Access can be achieved. Difficulties as well as possible ways of supporting Open Access were presented and discussed. These scientific discussions were rounded off with some cultural experiences like the Norwegian dinner and a city tour of Oslo.

The second part of the stay in Oslo was filled with the Annual General Meeting (AGM). In preparation to that, “newbies” to Eurodoc were invited to an introduction course on administrative and technical procedures within Eurodoc. In the morning, several presentations were held about current projects of Eurodoc. In the afternoon, four different workshops were offered and finalized with a joint discussion round. The last part of the day was reserved for the presentation of the financial statement, the annual report, a new Eurodoc-survey, the new website-project and the 2018 Eurodoc conference planning. Also, a voting on membership fees and some small changes in internal regulations took place.

On the last day, 29 April, the 2018 Eurodoc strategy was debated and the new board members, the members of the secretariat as well as the working group delegates were elected. Actionuni will be represented in the coming year by Cécile Blaser as Policy Officer (in job-sharing with Mathias Schroijen from Belgium) and Salome Adam (University of Zurich) as a new member in the Policy Research Working Group.

Most importantly, the initiative of actionuni to improve the inclusion of the non-professorial academic staff in accreditation processes of higher education institutions in Europe was included as a strategic aim for 2018. Namely, actionuni wants to have one seat reserved for a representative of the non-professorial academic staff in the accrediting expert commissions. 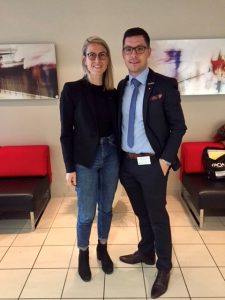