Last week, on 6 April,  actionuni held its yearly assembly of delegates. Amongst other business, the board was elected, seeing some old and new faces.

Carla Duss (PH Lucerne) and Andrea Tamas (ZHAW) were confirmed as co-presidents; additionally SAR-representative Florian Lippke (University of Fribourg) was elected as co-president. The change to having three instead of two co-presidents was initiated by the board and acknowledges the importance to always represent the three types of universities in Switzerland.

Andrea Zimmerli (PH Bern) and Armin Zenker (FHNW) were confirmed as actuary and treasurer, respectively, and Francis Kay (University of Lausanne), member of the new member organisation ACIDUL, joined as a new face.

Florian Besthorn (University of Basel) left the board after one year of hard work as well as Ruth Lyck (University of Bern). Fortunately, Ruth Lyck stays active as a co-opted board member as she is actionuni’s representative in the SHK. 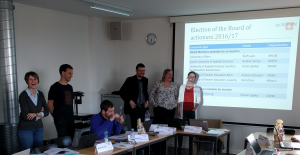